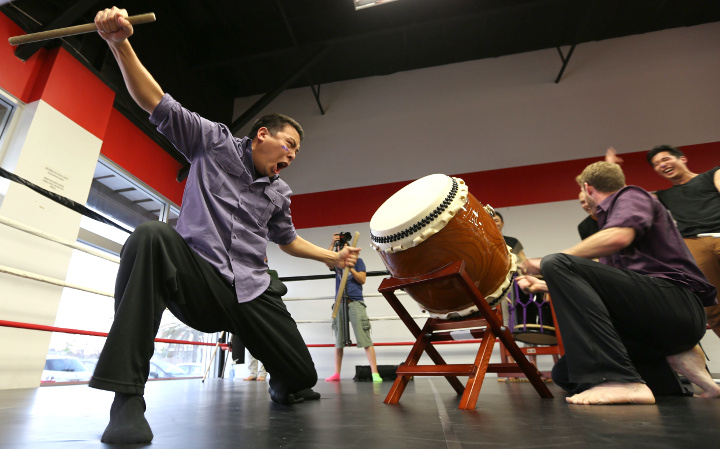 Featuring creative choreography and exciting rhythms from across the taiko spectrum, Matsuri Crashers battles showcase slant-drum performances in good-spirited competition. Participate with your own solo or duet, or be an "informed observer", celebrating participant's creativity, answering the "kakeai" shouts, and voting for your favorite performances!

The "Rock Solids" Matsuri Crashers base-beat crew offer six, ready-made "structures" that define the groove, solo length, and switch procedure for the participants. Soloists use these structures to perform, first calling out their desired structure with one of the "kakeai" vocalizations. Each competitor then performs their solo within the structure, concluding with the "shobu" rhythm which guides the audience through voting.

One or more of the structures will be taught at the beginning of the battle.

The Matsuri Crashers Battle concept is inspired by hip-hop dance, a remarkably vibrant art form that motivates kids in basements to practice for hours and friends on street corners to form teams. Hip-hop has developed into an internationally accomplished art form at the forefront of movement innovation and it has achieved these successes in only four decades. Compare this with ballet, also a world-class form but bolstered by 400 years of development and an extensive network of formal schools and support institutions. Two of the key sources of hip hop's productivity are the mutual enjoyment of inspiring dance music, and the opportunity for high-stakes solo performance.

Seeking to provide similar sources of inspiration, Matsuri Crashers develop diverse jiuchi (base-beats) designed specifically for the slant-drum performer, and energetic Battle opportunities as a showcase of individual creativity. It is the Matsuri Crashers' hope that the pressure of solo performance and the high-energy battle setting inspires deep practice and growth.

Battles that Matsuri Crashers would love to see...